Journey to the Forbidden City by Deepa Agarwal 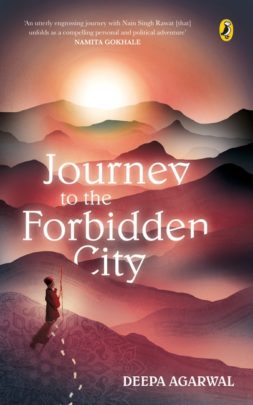 Nineteenth-century Tibet was an unknown entity, a complete geographical mystery to the West.

Where did its capital city Lhasa lie?
Which rivers, lakes and mountains stretched across this land?
Where were its fabled monasteries and legendary goldfields?
And did the magical flying lamas actually exist?

It was next to impossible for a white man to enter this rigorously guarded territory. And so was chosen an intrepid Indian explorer from the mountains of Kumaon-Nain Singh Rawat. Trekking across this country, he risked life and limb and donned innumerable clever disguises as he surveyed the vast expanses and identified countless villages, cities and people. From putting Lhasa accurately on the world map to earning the title of Pundit, his eventful and often arduous travels led to his name being permanently engraved in the annals of Indian exploration.

Based on his actual diaries, this gripping narrative is also a tribute to the indomitable spirit of this fascinating man, who rose from being an impoverished village schoolteacher to a legendary hero.

The synopsis does not do justice to what lies in this phenomenal book! This book was so so sooo brilliant that it does not even need any critical analysis and hence, according to me every reader out there should read this masterpiece!

Journey to the Forbidden City was not just a book. It was an adventure. It was an experience like no other. Words cannot describe what all I felt while reading this book as big words like “admiration” or “influential” are far too less to describe this phenomena!

Nain Singh Rawat was the first Indian explorer who surveyed the unexplored stretch of Tibet in the late 19th century. Other than that, he was first to sight-see the fabled gold mines of Thog Jalong, Tibet. First to describe Tsangpo (Brahmaputra) entry to India.
As a Pundit explorer, he was deputed by the Survey of India, then the Great Trigonometrical Survey, under British in the 1860s. Sadly, his adventures, struggle stories and achievements are much unknown to mass in general.

Author Deepa Agarwal covers the fascinating story of ‘Pundits’. She takes readers to the remote places of Asia covering many aspects of his expedition. I loved how genuine and comforting this book was! It really helps you believe that one’s determination and sincerity can really help them to achieve what they wish to and show the world that nothing is impossible!

Honestly, there is so much more to say about this gem of a book but I would prefer to control myself as I do not wish to give any spoilers as I really want you all to read and fall in love with this great book!

I would like to sincerely thank Penguin India for sending across a copy!