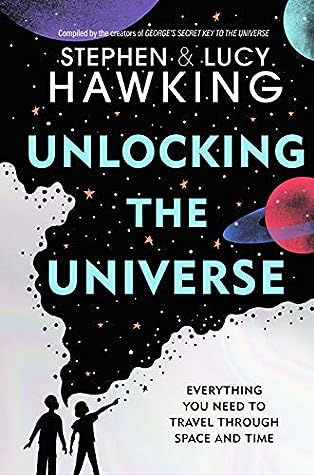 “..We can Boldly go where no one has gone before. Who knows what we will find and who we will meet?”

What would it have been like to walk the lava-filled earth four and a half billion years ago?

Or take your first step on the surface of the moon?

And what would you do if robots took over the world?

In their series of novels, George’s Secret Key to the Universe, Lucy and Stephen Hawking imagined what great adventures one boy might have if he travelled through space.

But the books were based on real-life facts – and together Lucy and Stephen collected an incredible wealth of information about everything from life on Mars to the secrets of black holes.

For the first time this non-fiction content has been collected into one astonishing volume, with brand new content for 2020, including facts about genetics, conspiracy theories and climate change.

Beautifully illustrated and absolutely bursting with amazing facts and figures, this is the perfect guide to everything you’ve ever wanted to know about our world and beyond.

“Unlocking the Universe” is correctly described as “Everything you need to travel through space and time”. The contents of the books are diverse: they range from the formation of the Universe to Artificial Intelligence to the future of the modern world.

Being a person who does not read much of non-fiction, let alone scientific non-fiction I was really taken aback by the versatility of this book. It had such easy language and the bare minimum technological jargon which made a person like me who rarely reads about science genuinely enjoy and understand everything the book aimed at.

“the darkness, however, there are quiet changes.”

I loved the logical and progressive style of the text’s layout. It was ensured that as we were presented with an overload of information, it was set out in such a way that we were developing a solid foundation of knowledge that intertwined with one another and did not exist in isolation.

On top of this, I thought it was clever to have a series of leading experts in their field contribute – it was interesting to see how they could translate their academic and scientific speech into something that could be easily understood!

Culminating Lucy Hawking’s journey of making science entertaining and engaging for kids, Unlocking the Universe, brings together inspirational science content from the George’s Secret Key to the Universe series into one bumper volume. Authored by the renowned father-daughter duo, this book encapsulates the universe in a nutshell with chapters on everything from the creation of the universe to time travel to the future of humanity. Beautifully illustrated and bursting with amazing facts and figures, this is the perfect guide to everything anyone ever wanted to know about our world and beyond.

Stephen Hawking was a brilliant theoretical physicist, generally considered to have been one of the world’s greatest thinkers. He was Lucasian Professor of Mathematics at the University of Cambridge and is the author of A Brief History of Time which was an international bestseller. His other books for the general reader include A Briefer History of Time, the essay collection Black Holes and Baby Universe, The Universe in a Nutshell, and Brief Answers to the Big Questions. He died on 14 March, 2018.

Lucy Hawking is a former journalist, having written widely for British newspapers, and the co-creator of the George series with her father, Stephen Hawking. Lucy now gives regular talks about science and stories to audiences all over the world.