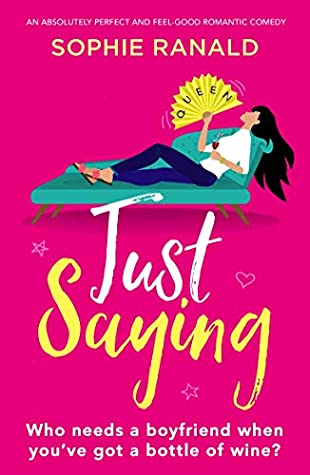 Just Saying by Sophie Ranald revolves around Alice and her boyfriend of two years Joe  who are living together. When Alice has a career set-back and can’t afford to pay her share of their rent, he asks about his ex Zoe living with them. Alice agrees unwillingly and the whole time wonders if Zoe is doings things in order to get back with Joe. Alice starts working at local pub and starts to wonder about what she really wants. Complicating things a bit is the next door brewery owner named Archie that she is starting to feel something for over their games of Scrabble. On top of all of that, Alice has a secret that she has kept from Joe that she worries about throughout the book.

The plot was like a roller coaster ride it had many ups and downs in terms of engagement and interest. It began on a simple and plain note then suddenly surprised me by the unexpected twists and then again became too plain and uninteresting. Overall, it was quite hard for me to invest myself solely in the plot due to it’s fickle nature.

“I felt like a failure. I felt as if all the sacrifices and compromises I’d made had been for nothing.”

The characters were quite interesting to read about however, to me they seemed to depend on the plot too much and had no spark of their own. Alice’s character had no developments and throughout the book she was shown to care only about her falling relationship while Joe had no idea about his girlfriend’s insecurities. While Zoe on the other hand no personality which was worth the scare for Alice.

The writing style was the only thing that kept me engrossed in this book as I love Sophie Ranald’s old books. I am familiar with her writing style and was glad to have a chance to read it again!

One thought on “Just Saying by Sophie Ranald : ARC REVIEW”