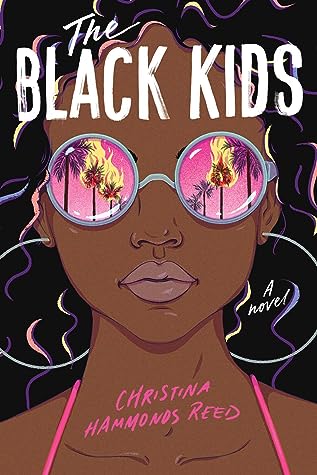 Ashley Bennett and her friends are living the charmed life. It’s the end of senior year and they’re spending more time at the beach than in the classroom. They can already feel the sunny days and endless possibilities of summer.

Everything changes one afternoon in April, when four LAPD officers are acquitted after beating a black man named Rodney King half to death. Suddenly, Ashley’s not just one of the girls. She’s one of the black kids.

As violent protests engulf LA and the city burns, Ashley tries to continue on as if life were normal. Even as her self-destructive sister gets dangerously involved in the riots. Even as the model black family façade her wealthy and prominent parents have built starts to crumble. Even as her best friends help spread a rumor that could completely derail the future of her classmate and fellow black kid, LaShawn Johnson.

With her world splintering around her, Ashley, along with the rest of LA, is left to question who is the us? And who is the them?

“Sometimes being different means hiding pieces of yourself away so other people’s mean can’t find them.”

When I began reading ‘The Black Kids’, I knew that this book will be one of the most memorable reads of this year. And when I finished reading it, I came to a conclusion that ‘Black Kids’ has now become one of the most memorable reads of my life! Everything about this book was outstanding! As the synopsis suggests, the story is set in the nineties and revolves around Ashley, a rich teenage black girl who has always been shielded from the brutal reality that takes place with the black community. But one April, while she was busy trying to fit in with the people who do not even understand the importance of diversity, she encounters something that changes her life for good.

The plot was really well-planned and well-researched. Every event that took place in the story and every fact left a great impact. The pace was really well balanced as well. It has been quite a long time since I have come across such a perfect plot.

The characters were pretty realistic and had a voice of their own. Be it the protagonists or the antagonists, I had a great time reading about them. It was an in-sighting experience to read about such diverse characters. It really made me learn a lot.

The writing style, according to me was something that really surprised me. I was not expecting the writing style to be so polished and good considering this is Christina’s debut book! I really believe through her book, she has done a brilliant job at in-cooperating every important issue revolving around the Black Community that needs attention.

Christina Hammonds Reed holds an MFA from the University of Southern California’s School of Cinematic Arts. A native of the Los Angeles area, her work has previously appeared in the Santa Monica Review and One Teen Story. The Black Kids is her first novel.

CONNECT WITH HER HERE:

LINKS TO BUY THE BOOK:

3 thoughts on “A Brand New Phenomena Exploring the issues of race, class, and violence | Blog Tour: The Black Kids by Christina Hammonds Reed”